For those who have been in the game for a while will know who this man is. Some who haven’t been in the game too long will also know him and those who have been on the wrong side of him will definitely know him. He is one of the funniest guys in BMX for sure, I had the joy of meeting him at the age of 6 when he along with the family took me and the old man to Rene Indoor race in France. It was this trip we also found out that my old man (Terry Issitt) realised that you have to have a passport to go to France (who would have thought it). Well 21 years later I still have a lot of time for the guy, thats Euan and my old man for that matter.

So BMXHype.com caught up with the busy man before he jets off around the world ahead of a busy BMX calendar.

One for the people who don’t know. Who are you and what do you do?

My name is Euan Goodman I am an international commissaire working for the UCI. 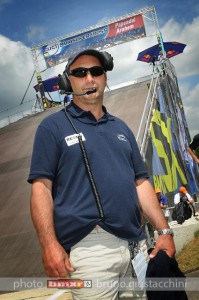 As the main man, you must be in demand for many races. Where is 2016 taking you?

I fly to Geneva tomorrow for a UCI meeting to discuss the World Championships, SuperX and the Olympics. In March I fly to Argentina for the 1st SuperX race, 2 days after that I’m at the Pan American Continental Champs. Then onto Manchester for round 2 in April, Papendal for round 3 in May. Then Columbia at end of May for World Champs and then Brazil in August for the Olympics.

What’s the mrs say about all these trips abroad? (A reliable source tells me you don’t tell her half the time)

I do let her know where I’m going but don’t discuss it lol.

What is your most memorable decision you’ve made?

I think it was the 1 in France at the Euro Champs, Keith Bryceland was on the gate in the final of the cruisers. As the starters call started someone made a noise at back of the start hill. Keith went over the gate and everyone else rode off down the track. I was about to stop the race when they all fell off in the 1st corner. Keith rode past them all and was a straight clear of the next rider. I thought that’s fair he back in the race lets carry on. What I didn’t know was that Keith would ride down the last straight still a whole straight in front and fall off. He then got back on his bike only to find out that he had snapped his forks and didn’t bother to finish. I couldn’t stop laughing but at the same time I felt for him.

How do you deal with those who don’t necessarily agree with your decision?

Its the same for all, I try to explain why the decision was made they don’t normally agree but that’s racing. I have to back the commissaires working with me otherwise we might as well go home. 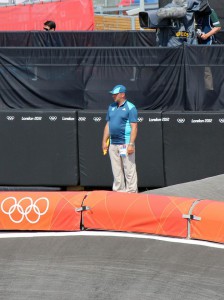 I’ve heard you are the main man for the O Show?

Yes I have been appointed to the event, it’s a honour to be part of the event. A special thank you to Carol Gosling who got me started as a commissaire.

A lot of drama around the test event, can you talk about it? Or did you fancy a second trip out to Brazil before the Olympics?

We had a few problems but that is why we run test events so that the main event shows how great BMX is.

Nervous about the Olympic?

No, we have a great team set up and who would not want to be out in the middle of the track watching the finals of the best cycling discipline there is.

How do fit all this in working 2days a week?

Its not easy but I try and start late and finish early so I’m not over tired.

Who’s going to succeed you when you throw in the towel?

I hope Ria will get right into it, she knows the sport well and would make a great International commissaire.

What do you think to Robbie Goodmans comeback?

Well… lets just see how many cross winds there are at races to put him off lol.

Tell the people about the story at Bournemouth when the beer was off?

Well Mutly (RIP) and me were drinking in the rugby club at Bournemouth track and he said that the drink was not right, but we kept drinking it anyway. Well, we left the club he was ill, I was sick, passed out outside my campervan. I woke up naked, sick everywhere so moved along the mat so was not lying in it then passed out again. Woke up at about 7am dragged myself inside camper and went back to sleep. Woke back up at 11am thought I’ll go over to the track lasted there 10 mins then went back to camper and slept till 4pm. So the beer was deff off.

Well… I don’t like them, this is a national series, finals are 1-8 thats it. B finals are for regional racing.

How did you feel when your favourite daughter gained that W1 plate (three times) ?

She deserved it she has stuck at BMX for so many years and is a credit to the BMX family. She always has time for anyone. So to be multi World Champ is no more that she deserves.

Why do you think your starting technique never really kicked on?

I don’t know it used to catapult me down the track, I think the main reason was clips not so easy to get your other foot in lol. 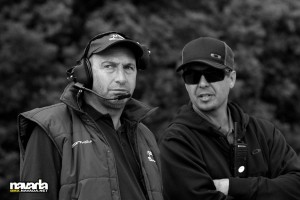 Well there you have it people. An insight from a man who has been in the game for a very long time. A genuine down to earth guy who doesn’t take himself too serious. If you never got a chance to see the famous starting technique it was a work of art.

Just remember if you see this face, you’ve probably done something wrong. Just take it, accept it and remember you are more than likely wrong. Racing is racing and leave it on the track. The officials do a great job and without them we wouldn’t have a race series… even if Euan didn’t see it, he’s still right.

One thought on “An insight from the main man”