How did you first get into BMX?

My brother got invited to the local track and I tagged along and had ago. Surprisingly, I really, really enjoyed it.

Where was your first victory?

Who inspires you in this sport?

If you didn’t compete in BMX what other sport do you think you could of ending up taking on?

It was only ever going to be BMX.

Injuries have hit in the past season or so, tell us what actually happened and the injury you sustained?

Wow, where do I start… this has definitely not been my year due to injuries. To start with in March, just before the season was about to start at one of the winter regionals in Manchester, I was practicing, maybe my 3rd lap. And my first proper injury happened. I was running up to 3rd straight, I jumped in and then jumped again as I took off for the next time my foot unclipped and I lost control and flew straight into the next jump and the pain hit like a brick wall. I never felt so much pain, right away I knew something was wrong, and then they said my leg was broken and they had to get me to hospital, I was so scared. So they put the drugs in me and off we went to the Manchester’s Children hospital. When I got there I had an x-ray and I couldn’t believe what I saw, it was a bad, bad break, and even worse when they told me I had to have an operation. I had the operation the next night and had two metal pins put in through my tibia and fibula and it was recovery time…
Its not finished there, as I recovered well and as my leg got stronger after 5 months, I started riding again and getting back into training, and it felt amazing. Blaine Davis came round my house and stayed for a few days as she and I are very close friends, and we went to Braintree BMX track together. Blaine and I were debating whether or not to jump the whole of second straight, we had run ups and in the end decided to jump it. I was pedaling round the berm with plenty of speed, I got the jumps smooth and boosted… as I landed my leg just went, it literally bent. The amount of anger and devastation I felt when that happened was unexplainable; I knew straight away that I needed another operation, as my leg didn’t look right. I went to hospital, had an x-ray and my tibia and fibula was broken again and the next day I had the operation, both pins came out and a metal plate is now in place. 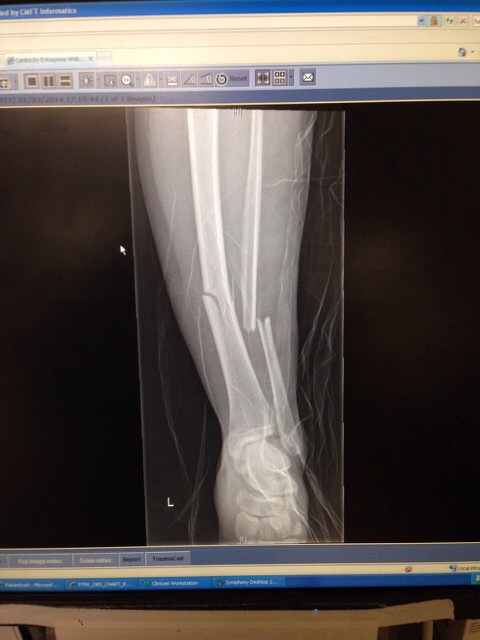 How have you coped being injured?

To be honest, going through injury is very tough for anyone, but for me as my brother races it has been quite hard attending races and not being able to ride or even walk. I guess you’ve just got to be patient and let it heal on its own because you will be fine in the end, that’s what I kept telling myself.

I came into the event confident but not 100% certain. I had been racing the girls all season and knew where I stood between them all; I just really wanted to win. During practice I got everything how I wanted to and ended up really loving the track. I jumped a double on 1st straight that I thought was easy but surprisingly no other girl jumped it so instantly that gave me an instant advantage. I won all my motos and my semi final leaving me very confident for the final but the tension was still very, very high between the girls and I was very nervous. The gate went down and I admit I didn’t get the best of starts but the jump just shot me forward and led the race till the finish line and I was ecstatic as I crossed it. My first proper important victory that meant so much to me, because I wasn’t going to the worlds so I wanted to make this race count. Overall, I had an absolutely amazing experience with my friends and family around me and supporting me through the eventful weekend.

Who is your greatest rival?

How do you see your future shaping out in terms of BMX?

I believe it is going well for me, I am very committed to BMX and want to make it all the way to the Olympics.

If you could change anything about the national series to make it better what would it be?

Well I’d say I would have the championship women prize money to be equal to the male elite, because the women train just as hard as the men. 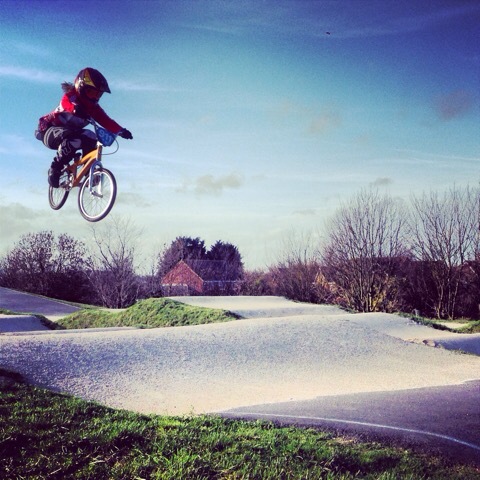 How would you describe yourself?

I’m pretty laid back and keep myself to myself

Any Thank you’s: Firstly I would like to say a colossal than you to my mum and dad for helping me get through my injuries and taking me everywhere. My nana and grandad for all the treatment with Brian Simpson.. A big thank you to my sponsors Charlie and Pete Phillips and Terry Hutson for giving me continuous support throughout and supplying me with all the best gear I could wish for. To Liam Philips for all the kind words and support over the past year. My friends who have encouraged me when I needed it, Mark Seaman for everything and finally to Sport England, Active Essex and the Rotary Club in Dunmow for their help and support oh and thanks for this interview, see you trackside!

One thought on “Injury hit Shriever gives hype the lowdown!!!”