As some of you would have seen, Kelvin Batey met a youngster called Callum at the Alvaston, Derby BMX track just casually riding around on a school day. He was on a make shift bike but Kelvin saw some potential in the little man and what happened next just may change this youths life.

Callum has a big goal. His goal is to reach the Olympics and Kelvin thought he may be able to help him. So step up the BMX community. Kelvin put a post on social media and christ did the BMX community step up. There was huge support for Callum and by the end of it Callum had a better deal than some of the Pros on the circuit.

Anyway today was the day that Kelvin delivered the BMX goodies to Callum at Derby where it all began just 3 weeks ago. 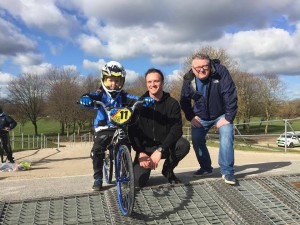 This is what Kelvin had to say about it all:

Three weeks after meeting Callum we were able to meet up with him earlier and give him a load of stuff that was donated by the whole UK BMX Community.

When I first met him I could see his enthusiasm for BMX and set out to try and get him a few things to help him progress and reach some goals he spoke about.

After the original post a few weeks back we have been overwhelmed with the amount of offers for donations and help so it came to a point where we could totally have kitted him out 5 or 6 times but the stuff that has come through from everyone has been absoloutely amazing. Callum is now decked out with a new complete race bike, helmet, custom race kit, goggles, number plate and custom stickers. There have also been offers to take him to regional races and purchasing his race licence….unreal!

For those that were saying Callum should have been at school on my last post he has had a few problems so only does half days. He spent all his free time on his old bike but he is now saying he wants to get back into full time education after the boost of receiving his new stuff.

Further down the line I’m looking to set up some kind of foundation in each region to do something similar for riders showing commitment to the sport and wanting to do well and this will be put together at some point at the end of this year.

Again, thankyou to anyone that has, or even offered to donate for Callum. He did say to say thankyou to everybody himself and he loves all his new stuff. I’m sure we will see him at some races this year especially with the British Championships being at held at Derby in August.

So proud to be part of this amazing BMX Community.

Well done to all those involved!!