Well by now everyone in the UK knows that Liam Phillips was crowned king of Manchester after going three years unbeaten at the World Cup event at the NCC. However that wasn’t the only thing that went on in an action packed weekend of racing.

Racing around the Manchester track only lasts around 30 seconds but really throws up some exciting action. With almost every race resulting in a crash for one rider, blink and you missed something for sure.

In this piece we will give you the low down on who won, how the GB riders got on, who crashed the biggest and some great pictures from the weekend.

Well, lets start where everyone else has… Liam Phillips. The man it seems simply cannot be beaten on his home track. Winning the Time Trial Saturday ahead of Connor Fields who was the only other rider to go sub 29seconds.

Sunday was no different for Liam. He was flawless throughout his three heats, quarter and semi final where he met current World Champ Sam Willoughby. Sam looked to have the snap in the Semi but Liam powered past down the first straight. The final was no different Liam got the holeshot with Sam in two. Nic Long was on fire all day especially with a serious first straight pull. Willoughby went down on his own which seemed to slow Long up allowing Frenchman Amidou Mir through for a 2nd place.

Check out the Final below.

Team GB are becoming a force to be reckoned with. Quillan Isidore, Kyle Evans, Tre Whyte and Charlotte Green all made it through to Sundays racing. Kyle had already qualified thanks to last years standing. Tre, Quillan and Charlotte qualified through the qualification motos on the Saturday.

Unfortunately Paddy Sharrock and Ryan Hutchinson didn’t make it to Sundays racing. Ryan Hutchinson didn’t make it to the gate on Saturday after suffering from food poison. Paddy on the other-hand was the most unlucky rider going on Saturday. Paddy was one of 12 riders who finished on 11 points after their three motos. With only two spots available to make up the final 64 riders going through to Sundays racing it meant it was left to count back. The way in which count back works in SX events is that your final lap time will go against those on the same points result in the fastest being placed ahead of the others. Paddy’s final lap time was the third fastest behind Brodi Turner and Quentin Caleyron. It got worse as Paddy missed out by 0.006 seconds with a time of 30.479 seconds and Caleryon’s time being 30.473 seconds.

Onto Sunday, more bad luck rained down on GB and this time it was Quillan Isidore. Quillan crashed in his first moto sliding out in the last corner. He was back for his second and ready to make amends and was looking like he was going to until a big crash into the first corner. Fair play to Quillan as he was up there and good to go for his third moto which I definitely wouldn’t have been but then again thats another reason why Quillan is where he is, he has a great determination to comeback from anything. Quillan seemed to hang back down the first straight for a clean run at the second straight but it wasn’t to be as he collided with Dutch rider Jay Schippers after the big step-up. This left Quillan dragging his bike off the track at which point I would have probably left it and sulked.

Kyle Evans had a good day but he was not happy. He wanted to make the main but just fell at the final hurdle getting a 5th in the semi final.  When you look at that semi final there were some huge names that also went out. Connor Fields, Carlos Oquendo and David Graf also bowed at in that semi final. Kyle was on fire claiming a 3rd in his quarter final and qualifying 1st out of his moto with a 1st, 2nd, 1st. Kyle was also involved in the Time Trail on Saturday night in which he finished in 6th place. Again Evans was not happy with this as he said he messed up his second straight. I wouldn’t mind messing my second straight and still being faster than Sam Willoughby and Maris Strombergs.

Tre Whyte followed up last years World Champs success with a good start to the World Cup SX series. Tre made the main event after finishing 3rd in his semi final. Tre looked  like he was going to make the podium as he pulled Nic Long in on the second straight. Long boosted the double into the second corner which left Tre nowhere to go other than into the back of him causing Tre to go down. Tre dusted himself off and finished 7th place.

Charlotte Green was looking good on Sunday qualifying out of her motos thanks to the countback rule. Semi final is where her day ended though as she finished 7th going out with Felicia Stancil, Lauren Reynolds and Amanda Carr. 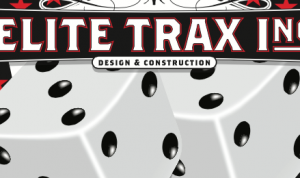 This is a new introduction to the 2015 World Cup SX series. Basically this kicks in during final time to goad riders into picking gate 8. If a rider picks gate 8 in their final and wins they double their prize money. From the Elite Men and Women finals on Sunday no rider decided to take gate 8 despite Max Cluer’s best efforts to tempt them, instead it was left to the rider with last pick to take gate 8.

I’m not sure what the coaches would say if one of their riders would have chosen it. But I guess time will tell and if a track better suits gate 8 who knows.

Wow… there were some huge crashes over the weekend. 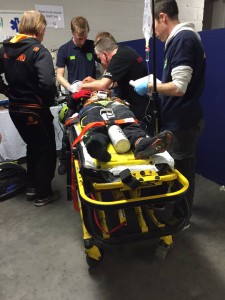 I will start with a good friend of mine Robin Van Der Kolk. You might know this name from the challenge classes, he is the man who won three back to back W1’s in 17-24 from 2012, ’13 & ’14. He then decided to step back up to Elite this year. He crashed twice on Saturday on the third straight in exactly the same place. The second crash was a lot worse. He face planted the final triple landing straight into the jump. Robin says he was knocked out for around 5-10mins and was told he had blood coming out of his ears. Speaking to him on the Sunday with a broken nose and a battered face he wasn’t phased by the crash and enjoyed his time in Manchester. 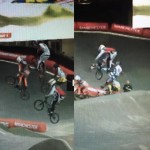 Another big crash from the weekend was two time Olympic Champion’s crash thanks to fellow countryman Edzus Treimanis. Maris Stromberg had to boost the final double on the second straight which left Treimanis almost going underneath Maris flipping him some way from the tarmac. He did get up and race his quarter final but clearly wasn’t right.

This picture is brilliant. You have to love Sylvain Andre or Andre as she kept calling him. 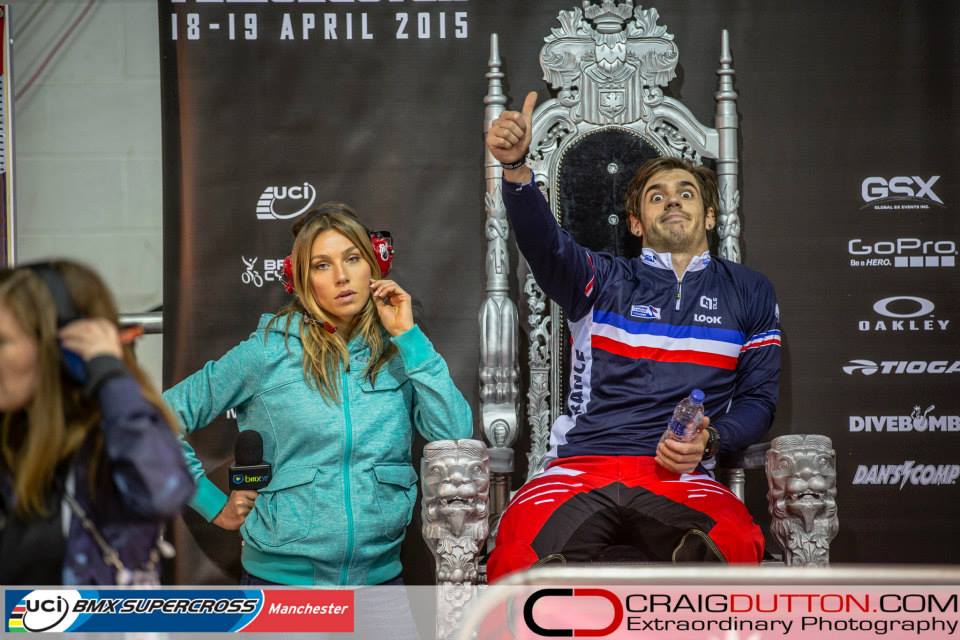 If you have a spare hour & 45mins and want to watch the whole World Cup SX Rd 1 again then click play on the video below.